I’m Amandine. Born and raised in Brittany, I started exploring the world in 2012 (short trips). After three years working as a social worker and traveling one month per year, I decided to change my life – so I started to travel “full-time” around the globe. I left France in 2015 and Australia became my new home for a year and counting 😉

I have met Adrian in this beautiful country. Adrian is originally from Germany and had taken 4 months sabbatical leave in 2014 to visit Australia.  He had fallen in love with this country and decided to quit his job in Germany. He hated the thought of going back and continuing working in an office.

We’ve lived and traveled together during 10 months in Australia and Indonesia. And now, our common goal is to keep on exploring the world together!

Through this blog, we are sharing our travel tips and stories from like-minded travelers. Hope you gonna be inspired to explore the world 😉

Read more about us here:

Europe, South East Asia, South America, Oceania… Exploring those continents opened my eyes. Staying in France, working 9-5 my entire life, not able to travel as much as I want to because of the “dream-house”, I said: NOT FOR ME!

After the end of a long relationship, I moved to my mum’s place with one goal: working as much as I could to save money and find the courage to start my first long-term trip on my own! THERE YOU GO!

To save money, I basically stopped spending money! I sold all the stuff I didn’t need and haven’t used anyways, and trust me there was a lot!

In 2015, when I came back from Brazil (it was crazy), I was feeling down. I just wanted to stay abroad. So at the end of my working contract in France, I applied for a Working Holiday Visa in Australia. Straight after approval, I bought the one-way ticket! FINALLY!

To be honest, leaving France, saying goodbye to my friends and my family was pretty hard and stressful. I was scared of leaving my “comfort zone”.  It’s so crazy to feel fear and excitement at the same time, jumping into the unknown. At the beginning of my trip to Australia, I was not able to speak English, I was feeling lost, and just thought I did a huge mistake…

Lucky me, one of my friends, met me in Melbourne and helped me to find a job. I stayed 2 months in Tasmania, worked at a blueberries farm, and met there two awesome Canadian Girls with whom I traveled through Tasmania and South Australia. AND THE ADVENTURE BEGAN!

After few weeks on the road, I decided to work more, to save more, TO TRAVEL MORE! So I arrived at Berri Backpackers and this is THE place where I met THE guy who was going to change my life!

I was almost on the way to Melbourne as this girl crossed my way.

As a solo traveler, you sometimes think about that moment you truly find a person you can think spending your time with. I told myself good things happen to good people Adrian.

Ah, by the way, I’m Adrian and the girl that I’m talking about is Amandine. She is from France and when I met her the first time her English wasn’t the best!

However, I remember the first days were all about “breaking the ice” and communicate more with playing and laughing together than deep conversations but it was so great! We played Skip-Bo, enjoyed the pool and drank goon!! (I will tell you just in a minute where this is all happening, stick with me).

As I spend more and more time with her, the plan to go to Melbourne dulled down. There has been something that I wanted to find out! I didn’t want to regret something and to admit myself afterward “Adrian seriously you just went now and didn’t even try! Shame on you!”

It was beginning of March 2016 and I was living for three months in Berri, South Australia.

We started finally to live together under one roof in our dog house, see picture below.

It was a perfect place to stay together but still to have this hostel environment and live with people from all over the world. We stayed in the Riverland (SA) for around 4 months and saved enough money to travel the rest of the year through Australia and Indonesia. It was an amazing time, I’m more than happy I had the chance to meet her! 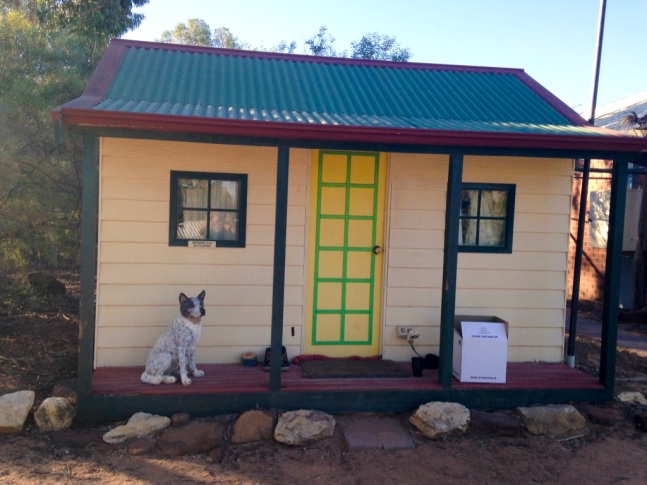 Get in Touch with us! We would love to hear from you.

The best way to get in touch with us is by e-mail. Feel free to drop us a mail through the contact form — We reply to every e-mail we receive.